Nature is an incredible thing - and there are few things in life as spectacular as this.

Seeing the lights caused goosebumps, and there are times where you stop to think about it - and realise you're freezing cold but with a huge smile on your face, and not wanting to be anywhere else in the world.

Our Northern Lights experience took us to the Wilderness Nangu lodge near Ivalo in Finland.

Going to see the aurora borealis is a big gamble.

On our journey through Europe, we heard from people who had gone to the top of Finland in the past, hoping to see the Northern Lights and leaving disappointed. I know of people who have been several times and are still yet to see it.

Winter is the best time to see them because it's so dark. But winter also brings snow - and cloud - the arch enemy of the lights.

We were told not to build up our hopes. Yeah, right. We expected to see them and wanted to give ourselves the best chance. So we booked ourselves on a 'northern lights hunting tour' where they drive you around looking for clear sky and a hint of the lights on the horizon.

So imagine our surprise when, on the first night, we walked down to the frozen lake and saw the green tinge up towards the north.

Tick. Mission accomplished. We had seen them! And on our first attempt. 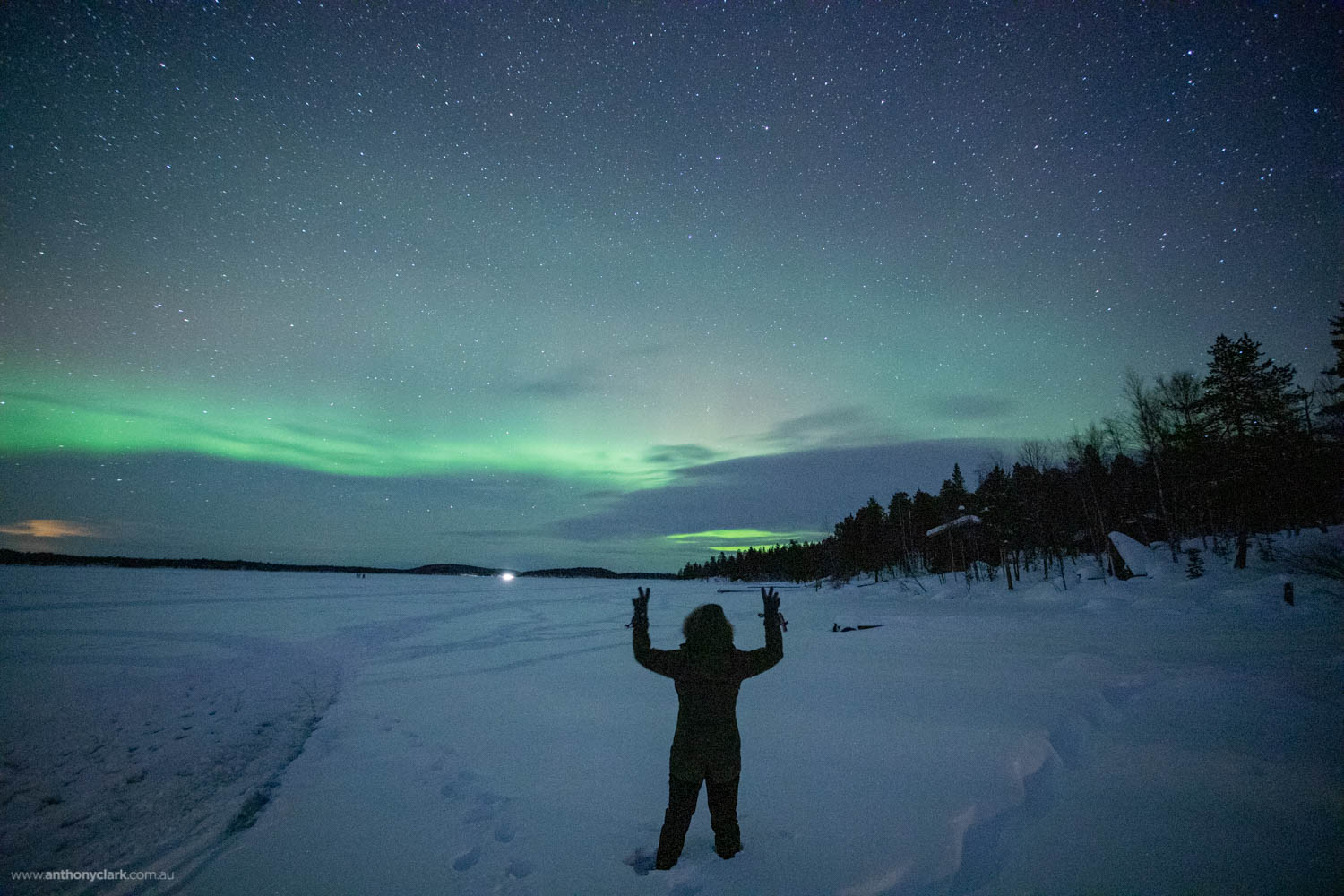 The lights were fairly feint and a little hard to see with the naked eye. This was New Years Eve, and what a way to ring in 2020 - with the northern lights and a fireworks display over the frozen lake.

On our second of our five nights, we were booked on the tour but it was cancelled due to cloudy skies. It was rescheduled to another night.

That night, we drove for hundreds of kilometres down dark snow-covered roads, hoping to see the lights. We had given up, satisfied we had seen them the night before.

Falling asleep in the back of the car, we were over it and just wanted to get back to the warmth of our room.

Then - and it must have been around 1am by this time - the van stopped suddenly, everyone piled out - and boom. The lights had been flicked on!

Two out of three nights? Winner. 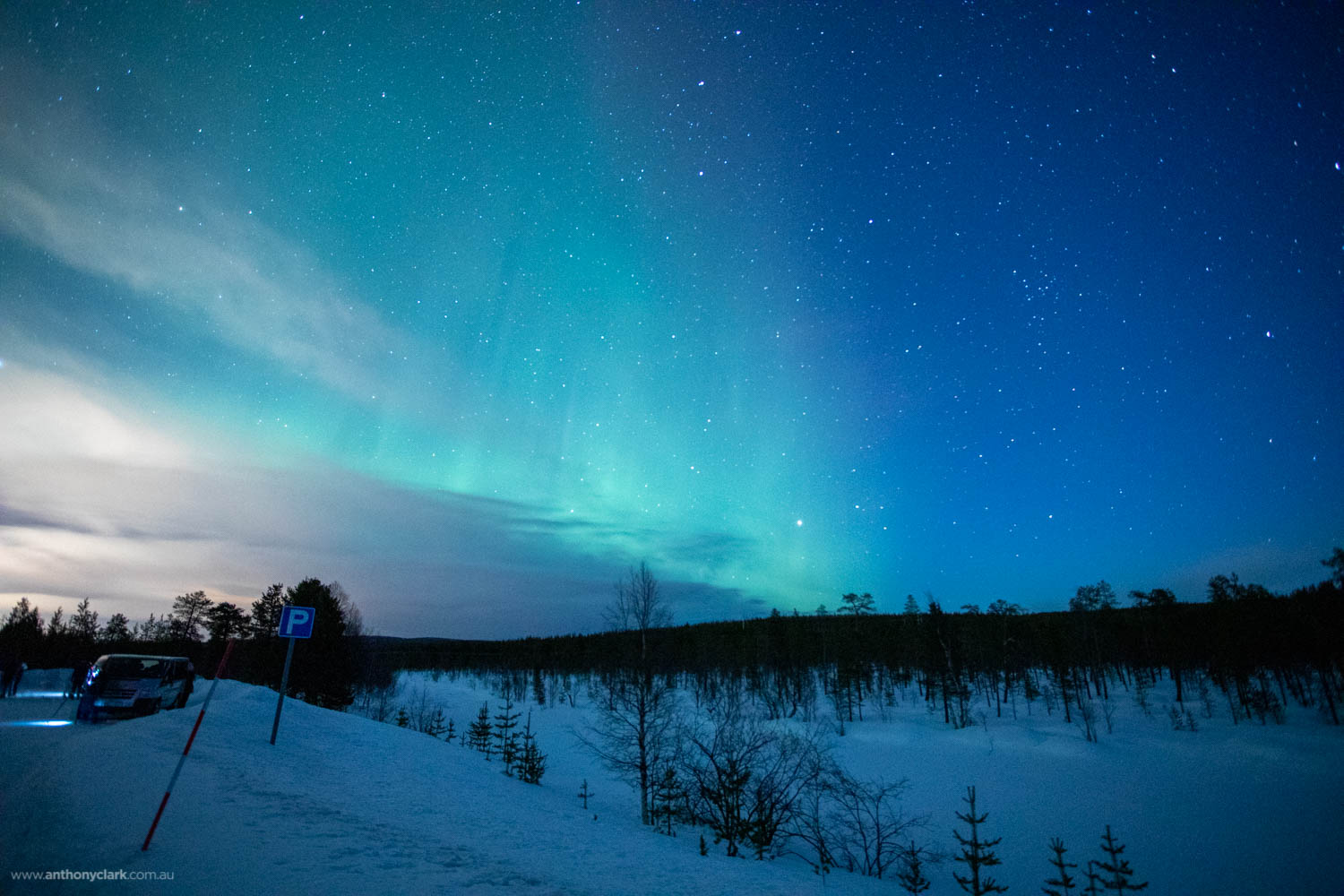 On our final night, we had checked in to another room. This one had a glass roof, so in theory, you could lie in bed and watch the night sky. After cleaning the snow off the glass, my wife said she wanted to see the lights that night - and pointed to a clear part of the sky.

Turning off the lights, we were then amazed. The lights were there.

A quick run with the camera down to the lake again and a few photos - before almost freezing to death (it was about -10 degrees and windy).

We had successfully seen the northern lights three out of five nights.

We decided to celebrate with some red wine at the lodge. Our final night in Finland had delivered.

It was late - and we'd moved onto the second bottle of red when one of the staff walked in and said 'look outside, the lights are out'.

Meh, we'd seen them before. We were warm and thought we had seen the best of it.

Until we peeked our heads outside. The sky was alive.

Seeing the northern lights is easily one of the most incredible experiences I've had. To see them three times, that's just insane.

We could go home very satisfied, and feeling very very fortunate that nature was on our side.